Community Rail in Lancashire – where, who and what!

Lancashire has five community rail partnerships (CRPs) that cover a total of seven lines or routes and these are one of the biggest groups of CRPs in the country. The five are:

West of Lancs CRP – Preston to Ormskirk, Wigan to Southport & Wigan to Kirkby.

The education programme is an integral part of our daily CRP management. We believe that school-aged children, as the ‘Passengers of the Future’, must be able to access and understand the rail network.

We offer a comprehensive and adaptable education programme, and have reached over 5000 children in 100 schools to date. Our key programme involves a visit by us to your school, followed by a guided train journey on another date.

All activities are closely linked to National Curriculum objectives. More information can be found within the ‘schools’ section of this website, along with examples of work in the ‘stations’ section.

We are fortunate enough to have an excellent partnership with the British Transport Police, and work regularly with Officer Dax to engage children in the topic of rail safety, and ensure all young people have all the knowledge they need to use the railway. The programme was ‘highly commended’ in the Outstanding Teamwork category at the 2016 National Rail Awards. The presentation is variable, age-appropriate and includes dialogue about the consequences of a criminal record, delivered in a meaningful and approachable way.

Best of all, the programme is completely free of charge! If you are interested in engaging your class or school in our programme, please get in touch at www.downtheline.org.uk.

Richard started out as a history teacher but was the ‘father’ of many rail user groups in the 1980s & 90s including the Ormskirk & Preston Travellers Association (OPTA & now the Ormskirk, Preston & Southport Travellers Association OPTSA), Ribble Valley Rail (RVR), the South Fylde Line Rail Users Association (SFLRUA) and the Lancaster and Skipton Rail Users Group (LASRUG). He was also involved in the creation of many Friends of Stations groups and Station Partnerships well before the rest of the country caught on to this idea. His role as Rail Development Team Manager with LCC has seen him involved in the creation of three transport interchanges at Burscough Bridge, Carnforth and Clitheroe and also the County’s project manager in the building of Accrington Eco Station and the new station build at Buckshaw Village, between Leyland and Chorley.

Simon, although qualified as a medical microbiologist, worked in the railway industry for over 31 years and brings a wealth of experience to his role as Community Rail Development Officer with Community Rail Lancashire. He started out as summer staff with British Rail in Blackburn booking office in May 1983. Since then he worked in just about every booking office in the area and after a spell in training, moved on to become a Station Manager with responsibility for most of the stations and staff throughout Lancashire. He manages the Community Rail Lancashire websites including DalesRail and is also editor of Reading Between The Lines the newsletter of the CRPs.

Karen started her career in the entertainments industry spending a season in Bognor Regis as a Redcoat before moving to Menorca as an entertainments representative. She studied Primary Education for four years at Bradford College before graduating in 2008. For the past ten years, she has taught across the primary phase in Bradford and has held the responsibility of being a subject leader for English, maths and music. In addition, she has published education resources which are used in schools nationwide. Karen joins Community Rail Lancashire with great enthusiasm and looks forward to developing exciting education programmes focussing on the eastern side of the network.

Katie’s background is in art and education; both of which she is genuinely passionate about! In 2015, having taught for a number of years at secondary and college level, she decided to leave the teaching profession in order to work as an independent artist and educator. Katie has extensive experience of supporting a wide range of people of all ages to become more confident and creative and joins Community Rail Lancashire to help develop the organisation’s work with our more ‘vulnerable’ groups.

Shahiesta began her teaching career in 1998 and has worked as a teacher of Religious Studies and Citizenship in secondary schools in Blackburn for twenty years. She has been the co-ordinator for Religious Education, Citizenship and PSHE and is genuinely passionate about preparing young people for the world outside school. She has an interest in community projects and works voluntarily with Maundy Relief, Lancashire Volunteer Partnership and various community mosque groups. She is excited to join Community Rail Lancashire and is looking forward to working with the various partnerships to develop some exciting educational projects.

Caroline lives on a family run dairy farm in the Ribble Valley. Following training in further education, she taught Business Studies, at Myerscough College, where she managed an Equine Course. For 13 years, she developed bespoke training packages for personnel in food manufacturing settings, before joining Lancashire County Council in 2008. Her work with LCC included promoting all forms of safe and active travel – walking, cycling and public transport; work she will continue in her new role with CRL! Caroline is not unfamiliar to the work of CRL, as in early 2009, she supported the production of a series of Cycling into Railway History leaflets, highlighting disused railways in East Lancashire and more recently, the work at Ramsgreave and Wilpshire to brighten the station for users. In her spare time, Caroline likes to walk and cook (not at the same time!). 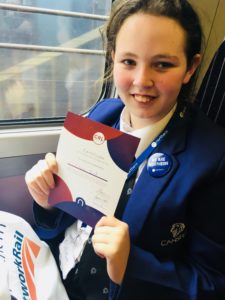 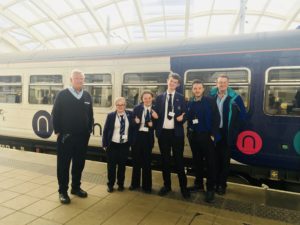 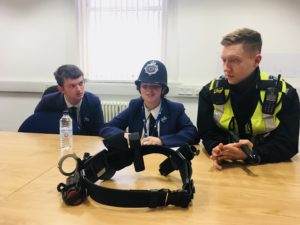