In November 2014 a class of pupils from Padiham Green Primary School made the trip of a lifetime to Aachen in Germany. The trip was arranged as part of the continuing Community Rail Lancashire Education Programme in conjunction with the Interreg IVB funded Citizens’ Rail Project.

To read the teacher’s blog documenting the trip, click here

The journey from Padiham to Aachen started in May 2014 when Brian Haworth, Community Rail Development Officer with Community Rail Lancashire visited Janet Ennis, Deputy Head Teacher at Padiham Green School, Burnley, to see if she would like to involve her year 4 class in the opening of the new Burnley Manchester Road Station. The opening had been designed to coincide with a Citizens’ Rail Partner’s meeting taking place in July.

This was a school trip on a large scale and involving a number of partners. Our Citizens’ Rail colleagues in Aachen played a significant role in helping with the arrangements and in particular finding a school that the pupils from Padiham Green could spend some time with. It was also expensive and the project gained funding from a number of sources including train operator Abellio and the UK – German Connection on top of the ERDF grant through Citizens’ Rail and a DCRDF (*) grant from ACoRP.
Padiham is a deprived area in the borough of Burnley and many of the pupils have never been to Europe so it was the chance of a life time to broaden their horizons. However, this was an educational trip and our European partners working with Padiham Green developed a timetable that mixed trips out with some serious educational work at the Domsingschule using CRLs resident artist Alastair Nicholson. The pupils worked on various projects and one of those was to contribute to the blog which the Head, Mark Dixon, kept up to date every day and makes a fascinating record of this trip and of the pupils own work and thoughts about it. 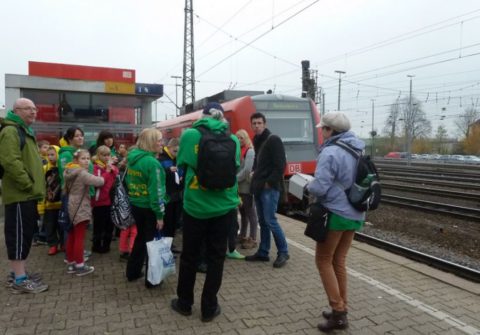