Birkdale railway station serves the Birkdale suburb of Southport, England. The station is located on the Southport branch of the Merseyrail network’s Northern Line. 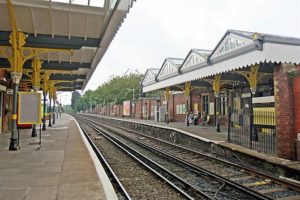 The first Birkdale station opened on the then new, single track Liverpool, Crosby and Southport Railway. This station was located at “Old Gilbert’s”, over half a mile nearer Liverpool than the present station. The line was subsequently developed rapidly, being doubled and completed through to Liverpool. In 1851 this station was replaced by a wholly new, two platform station called “Birkdale Park” which formed the basis of the present day station. By 1910 it had been renamed “Birkdale”.

The line became part of the Lancashire and Yorkshire Railway (LYR), on 14 June 1855 who took over from the (LCSR). The Lancashire and Yorkshire Railway amalgamated with the London and North Western Railway on 1 January 1922 and in turn was grouped into the London, Midland and Scottish Railway in 1923. Nationalisation followed in 1948 and in 1978 the station became part of the Merseyrail network’s Northern Line.

The signal box adjacent to the station, built in 1905, is a Grade II listed building. Birkdale is the only station on the line that still has a signal box.