Blackburn was one of Lancashire’s original cotton towns. In 1880 it had a population of over 100,000. Just over a hundred years previously it stood at 5,000 and the huge rise is down to the growth of the cotton trade. Blackburn sits in the valley of the River Blakewater. The town was built where the Roman military road from Manchester to Ribchester crossed the river. In the doomsday book the town is called Blachebourne. 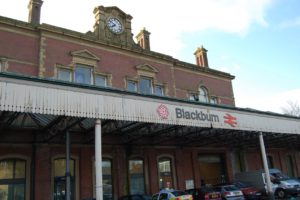 The Railway station was recently partially rebuilt and is a major junction station for East Lancashire’s community railways. It is a manned station complete with a booking office, waiting room and a café in the main station entrance area. There has been a station on the site since 1846, though the former L&YR platform level buildings and train shed were demolished and rebuilt in 2000. However, the grade 2 listed facade remained and was partially refurbished, featuring the station clock and surrounded by ornate stonework. A new platform canopy and waiting room was built on platform 4 in 2011.

Blackburn’s town centre, currently being redeveloped, boasts a good mix of retail outlets and its market is very popular. There are several buildings of note including the Town Hall and parts of Richmond Terrace. The museum highlights the history of the town and Corporation Park stands close to the town centre. Blackburn Cathedral with its famous lantern tower is situated close to the railway station and well worth a visit.