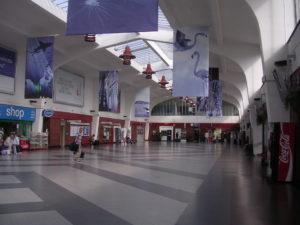 The station was opened in its present form in 1974, and succeeded a previous station a few hundred yards away on Talbot Road which had first opened in 1846 and had been rebuilt in 1898. The present station is based on the 1938 concrete canopy which covered the entrance to the former excursion platforms of the old station.