Rice Lane railway station is a railway station in Liverpool, England, located to the north of the city centre in the Walton district. It is on the Kirkby branch of the Merseyrail network’s Northern Line.

The station was opened on 20 November 1848, and was known as Preston Road until 14 May 1984. It is located just to the north of Walton Junction, where the Kirkby and Ormskirk branches of the Northern line diverge; Walton (Merseyside) station on the Ormskirk line is close by (5 minutes away on foot along Hornby Road). 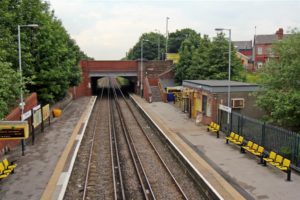 Rice Lane is staffed throughout day, as is the norm for Merseyrail stations from start until finish of service. The ticket office is located on the Liverpool-bound platform and there are shelters on each side, along with digital information screens and timetable posters. No step-free access is offered, as the only way to reach the platforms is via a staircase from the road after which the station is named (the two platforms being linked by a stepped footbridge).