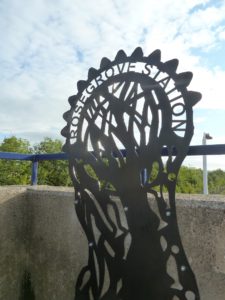 At this time the areas adjacent to Rose Grove were agricultural but with print works and cotton mills developing at nearby Lowerhouse. Rose Grove’s development started in earnest when the railway expanded building an engine shed and large marshalling yards. Unlike many local Lancashire towns whose census figures showed large percentages of mill workers Rose Grove statistics showed the railway as being a major employer with guards, porters, firemen, platelayers and the like well represented.

The loco sheds closed at the end of steam during August 1968 and with the closure of the goods yards and de staffing of the station the railways presence in the town was drastically reduced.