There has been a station at Squires Gate since 1st April 1865 when it was called Stony Hill. This closed in 1872 and a new station opened 14th September 1931. 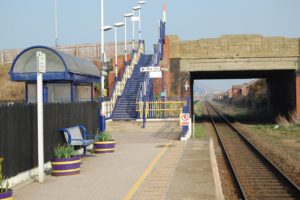 Now an unmanned halt it is the closest station to Blackpool International Airport and signage at the station reflects this close link. The station has also served the Pontins Holiday Centre at South Shore for many years but it has been announced recently that this will close at the end of the 2009 season.

The station is also only a short walk from Starr Gate, the southern terminus of the Blackpool tramway and there is easy access to the newly revitalised South Promenade with its interesting art installations. It is also the nearest station to the southern starting point for Blackpool Illuminations.