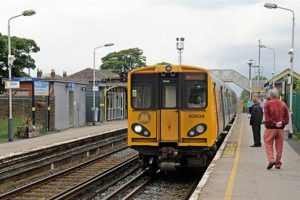 Ainsdale railway station opened in 1848 as an intermediate station on the Liverpool, Crosby and Southport Railway. On 14 June 1855 it became part of the Lancashire and Yorkshire Railway (LYR), which took over from the LCSR. The Lancashire and Yorkshire Railway amalgamated with the London and North Western Railway on 1 January 1922 and in turn was grouped into the London, Midland and Scottish Railway in 1923. Nationalisation followed in 1948 and in 1978 the station became part of the Merseyrail network’s Northern Line.

In August 2009, electronic real-time passenger information screens were installed at a cost of £50,000, one located in the ticket office, one in the waiting room on the Southport bound platform and one on the entrance of the Hunts Cross Platform. The station itself has benefited from £100,000 of improvements, both platforms have had their waiting shelters refurbished, with automatic doors added, as well as lighting, heating, CCTV, floor tiles and new seating.