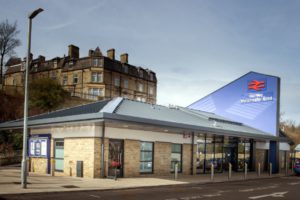 The station was closed by British Railways on 6th November 1961 but was rebuilt and reopened during 1986, two years after the successful reintroduction of services between Leeds and Blackpool.

A new station has been built at Manchester Road part funded by the Interreg IVB project, along with Burnley Borough Council and Lancashire County Council. The building includes a booking office and this opened on 17th November 2014.