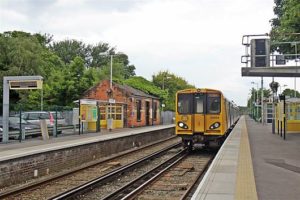 Freshfield opened in 1854 as an intermediate station on the Liverpool, Crosby and Southport Railway. It was built at the insistence of the local landowner, Thomas Fresh, to provide him access to the railway, as when the railway opened in 1848, there was no village for it to serve. Fresh donated his own land for the purpose.

It became part of the Lancashire and Yorkshire Railway (LYR) on 14 June 1855 who took over from the (LCSR). The Lancashire and Yorkshire Railway amalgamated with the London and North Western Railway on 1 January 1922 and in turn was grouped into the London, Midland and Scottish Railway in 1923. Nationalisation followed in 1948 and in 1978 the station became part of the Merseyrail network’s Northern Line.