Hillside railway station serves the southern half of the Birkdale area of Southport, England. It is located on the Southport branch of the Merseyrail network’s Northern Line.

It is the closest station to the Royal Birkdale golf course, and is extremely busy when major events (such as the Open Championship) are held there. 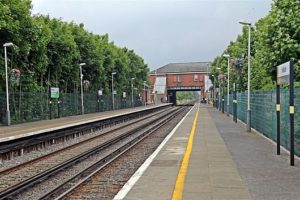 Hillside opened in May 1926 as an intermediate station on the ex-Lancashire and Yorkshire Railway (LYR) after the 1923 grouping into the London, Midland and Scottish Railway, and long after the railway had originally opened in 1848. By this time, the area had developed into a sizable residential suburb of Southport.

Nationalisation followed in 1948 and in 1978 the station became part of the Merseyrail network’s Northern Line.