Huncoat station is situated close to the village centre. The village sits below the nearby Hameldon Hill. The doomsday book spells the village name as Hunnicot. The village was shown on Christopher Saxton’s 1577 map of Lancashire. 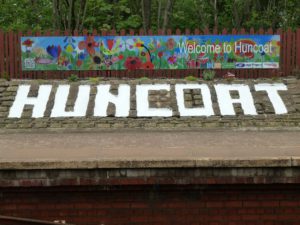 The Leeds and Liverpool canal reached Huncoat in 1801 and by 1830 the local brick making industry had been established. The original railway station at Huncoat was situated off Altham Lane close to what became the power station site. Huncoat coal pit was opened in 1885 when the first shaft was sunk to a depth of 850 feet. In 1902 the railway station was re located to its present site.