Kirkdale railway station is  in Kirkdale, Liverpool, located to the north of the city centre on the Northern Line of the Merseyrail network. It acts as the interchange between the branches to Kirkby and Ormskirk; these lines diverge just north of the station.

The station originally opened as Bootle Lane was built by the Liverpool, Ormskirk and Preston Railway and Liverpool and Bury Railway at the start of their joint line into Liverpool, opening in 1848. In 1977 it became part of the Merseyrail network’s Northern Line. 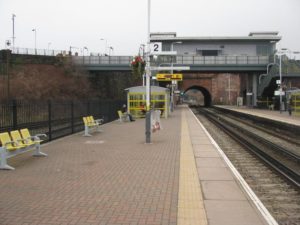 The station (as is usual for most on Merseyrail) is fully staffed throughout the hours of service all week. The platforms are fully accessible and step free and there are shelters, customer information screens and timetable poster boards on each platform. The station has two car parking spaces for disabled users and cycle racks for 10 cycles