The station was built in the 1970s, as a replacement for Liverpool Exchange railway station, opening on 2 May 1977. The station was opened by British Rail and is accessed via entrances at Moorfields and on the corner of Old Hall Street and Tithebarn Street. 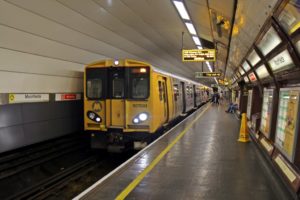 The station is staffed, 15 minutes before the first train and 15 minutes after the last train, and has platform CCTV. There is an M to Go shop, toilet and live departure and arrival screens, for passenger information. The station a 32-space cycle rack and secure indoor storage for 32 cycles. The Old Hall entrance has no disabled-access facilities. The Moorfields entrance has lifts but they have narrow entrances with openings of 800mm.