Rainford railway station is situated to the north of the village of Rainford, Merseyside, England. The station, and all trains serving it, are operated by Northern.

It was built in 1858 as Rainford Junction at the junction of the Liverpool and Bury Railway, the East Lancashire Railway’s Skelmersdale Branch and the St. Helens Railway, replacing an earlier station (1848) called Rainford. 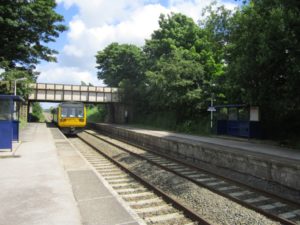 Though the station had sizeable buildings on both platforms at one time, the last of these (on the Wigan-bound platform) was demolished in the late 1990s. There are now just basic shelters in place on each side, along with a footbridge to connect them.