Bonded Together With A Prayer Bead

Community Rail Lancashire has been working with Arts2Heal, a small charity in Blackburn that was set up to help and support people with issues of anxiety and depression through the medium of art.

The primary aim is to use creativity to help people overcome mental health barriers to participating more fully in society, with the secondary objective to help build confidence and valuable employability skills.

This helps people become more active in their local community and society at large as well as to look for employment in either a paid or in a voluntary capacity.

The idea of Bonded Together with A Prayer Bead came about during a series of meetings in Blackburn that were facilitated by Near Neighbours, which is an initiative that aims to bring people together in communities that are religiously and ethnically diverse, so that they can collaborate together on initiatives that improve the local community in which they live. Working with Near Neighbours, Arts2Heal developed an idea with Community Rail Lancashire that would bring the diverse communities in East Lancashire together as well as introducing them to local rail travel. This helped them gain confidence in using the railway as a means to meet new people and take up employment and volunteering opportunities away from their hometown.

Many religious faiths use prayer beads as part of worship so Arts2Heal’s idea was that people from the different faiths and communities would each decorate a prayer bead. Each individual bead is in fact an 8 cm polystyrene ball – which on completion would go towards the 1000 bead long thread which would be nearly 100 metres in length.

An aim of this creative project was to help to break down barriers and encourage new friendships, empowering individuals with confidence to start conversations in their communities. Some of the participants of the project had been trained to run the art workshops as facilitators by Arts2Heal and these facilitators travelled to different venues in order to encourage and facilitate workshops where people decorated the beads as well as starting conversations and forming friendships.

A variety of community groups got involved such as care homes for the elderly, schools, mosques and community centres as well the local council who decided to have a team building session at the Arts2Heal Hub. The Sisters Club, who have adopted Accrington Station also took part in one of the workshops which was held at the school room at Accrington Station. The trained facilitators were gaining in confidence and were travelling by train along the East Lancashire Line from Blackburn to Accrington, Burnley and Nelson, something they had never felt able to do before.

With the help of Northern, LNER and Cross Country, the project culminated in a trip to Cambridge to display the amazing thread of beads at the Cambridge Eco Mosque. The aim of this trip was to showcase the thread of beads that had been contributed to by 1000 people but also to retrieve a missing bead that was taken by a member of the Woolfe Institute in Cambridge as a way of encouraging the group to visit. For most of the participants this was the furthest they had ever travelled by train and was a real learning experience for them as well as an extremely enjoyable trip.

The mosque was a revelation in sensitive and sustainable construction; symbols uniting the afterlife and the Earth are represented in floor tiles and Quranic verses tiled into the walls. The mosque’s sustainable credentials are outstanding, with majority sustainable wood construction, water and energy conservation, rainwater use alongside solar panels and much more. The Imam explained the belief that the planet is entrusted to humans from God, with the 16 soaring ‘tree’ columns representing openness to all people. It seemed to fit seamlessly into the nature of Bonded Together with a Prayer Bead as a project.

This creative project was ambitious and had high hopes of helping to break down barriers and encourage new friendships. It managed to fulfil these aims and not only encouraged its participants to travel safely and confidently by rail but has brought about an enthusiasm for rail travel amongst the members of Arts2Heal. This charity is now in the process of adopting a local station and are looking forward to having a space where they can showcase their work. It has helped to instil a sense of belonging amongst the participants who now feel they have the confidence to go back to meet some of the people they have worked with.

The feedback from Arts2Heal has been extremely positive. Community Rail Lancashire has been able to help this charity and its members to experience something that many of us take for granted- the ability to travel independently and with confidence. The process of facilitating workshops where people of different ages, cultures, faiths and beliefs was uplifting and a real example of community rail in action, helping to promote integration and community cohesion.

A participant from a women’s group in Accrington commented: ‘’It’s nice to be part of something that’s brought people from different communities together in such a meaningful and creative way.’’

Bonded Together with a Prayer Bead can be adapted by CRPs that would like to do a similar project. As mentioned, prayer beads make an appearance in worship in most Faiths so this could be project that brings local churches or other faith groups together. It could be completely unrelated to religion and focus on a different theme such as community, mindfulness and mental health and wellbeing. It could focus on a particular age group such as children or the elderly. It could be something that brings communities together around Christmas time, making it into a tree decoration. The possibilities are endless! The key is to know the community you would like to engage. Many CRPs have great links with local community groups and schools that enjoy being part of this kind of activity, especially around certain times of year such as Christmas. Getting in touch with the groups and schools with a flyer and arranging to meet key people is a good start. 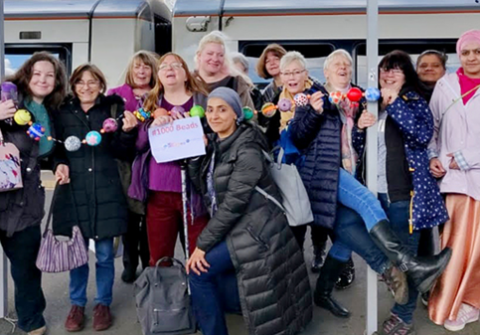 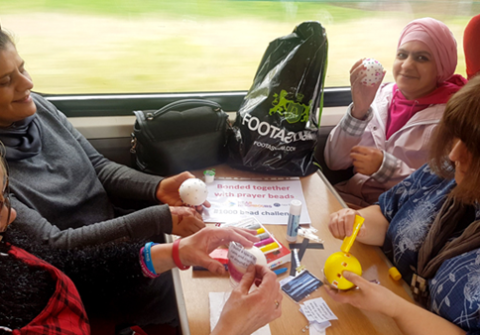 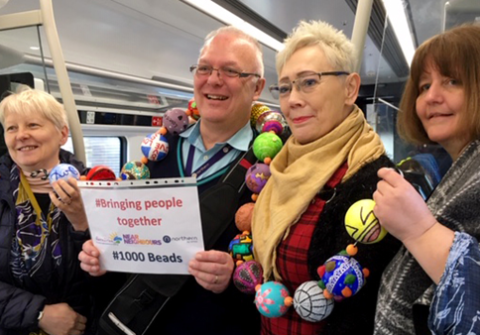 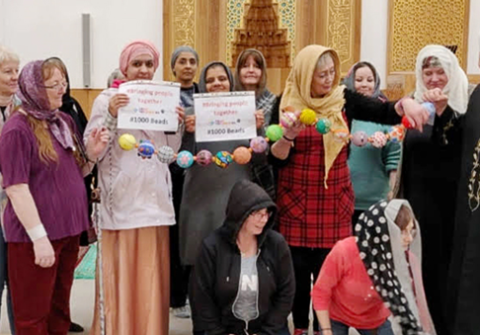