How do you make railways and trains interesting to a young audience who may never have travelled by train and normally go everywhere by car?  That was the issue tackled by Apple Video who were engaged to develop the ‘Explore the Ribble Valley’ DVD.  Using all their creativity and ingenuity they created the cartoon character that became known as ‘Brian the Bull’, named after the person who provided the voice overs for the DVD.

Brian the Bull has been seen wearing a hard hat, as he described how the new Accrington Eco Station was built.  He also appears on badges and stickers much loved by children when they come to visit CRL at its Accrington base.

Brian is the mascot of Community Rail Lancashire; with his friendly smile, he engages children of all ages in Primary Schools across Lancashire in the topics of safety, environmentalism, and above all, enjoyment, when they begin to learn about the railway.

Want to know more?  Then click here to go to the Teacher’s Packs project section where you will find examples of booklets designed to be used with the DVDs or by themselves. The packs include questions that can be used as a little test or as a class activity – answers are provided!

Let us know what you think by emailing us at info@downtheline.org.uk 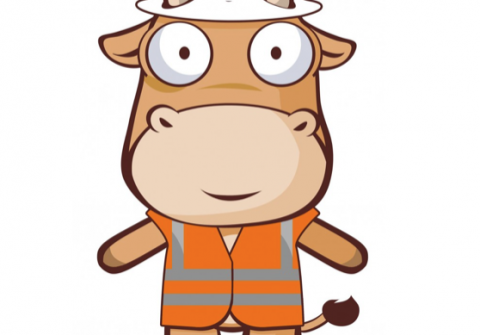